As you can see from previous entries, the inaugural run of the Portland, Oregon Trashspotting Club is complete. While our club currently has a somewhat of an anemic roster, what with me acting as Boodge-Jimframe and all, we are actively recruiting. If you think you have what it takes to trashspot with the best of them in Portland, please feel free to email me. 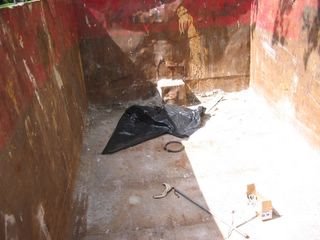 This was an "over the rim" shot that I didn't see until I downloaded it off my camera. Clearly construction waste. Seems like a bit of overkill to have an entire dumpster for a broken saw and an empty garbage bag. One can surmise that inside the house they have a 47" television but have only subscribed to basic cable. 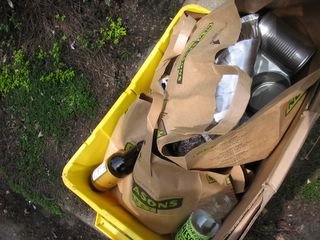 This is someone who actually took the time to remove the labels from the cans and sort the recycling into types, despite the fact that our fair city has no ordinance mandating this practice. Here we have an over acheiver. For them, there is a best way to do everything, even if it is kicking organic microbrew bottles and empty dolphin-safe tuna cans to the curb. 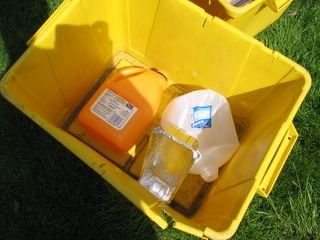 In a week's time, the only thing this household consumed was a gallon of orange juice, a gallon of milk and what appears to be a pound cake. One could draw the conclusion that while no one in this house could be considered to have a healthy diet, they will not, in fact, contract scurvy.